In a two-hour keynote at the annual Google I/O Conference, the company has made many important announcements. Don’t worry if you couldn’t watch it all. We have covered all the important points in this blog.

Google I/O 2019 is one of the most important events like every other year. This year too, Google I/O was held at Mountain View, California at the Shoreline Amphitheater. The event will host Googlers and the I/O attendees from May 7 to May 9. However, as per the recent report in Techcrunch, the opening keynote took place on May 7 at 10 am. There were various session and presentations succeeding the keynote for the rest of the event.

The keynote seems to have a lot of promise for many of the expected topics right from a new phone to the next Android Q beta. They also had a bunch of other things to share regarding the apps and games along with some Google Home products.

The Google I/O was opened with a combination of featuring gaming, virtual reality, augmented reality and some Star Trek and Night Rider. Sundar Pichai began the presentation with the recent stuff Google has been working on. Later, he went on to talk about the I/O app that uses augmented reality to help the visitors get around this year. The same feature is a newly introduced feature in Google Maps.

Well, let’s sum up the major announcements made at the conference for the consumers with this keynote:

Google Pixel 3a and 3a XL

Google announced the launching of much more affordable versions of its Pixel 3 phones. They have changed the processor of the phone from Snapdragon 845 to Snapdragon 670 in order to make the phone pocket-friendly. The storage of this phone is 64GB and even if they have dropped the idea of wireless charging for the phone they have made a room for 3.5 mm headphone jack! The range of Pixel 3a phone will start at $399. It will have a 5.6-inch display, 12.2 mp rear camera and will run Android P out of the box. The Pixel 3a XL will start at $479 and has a 6-inch screen.

The Google Home Hub is being renamed as Nest Hub and the price is brought down from $149 to $129. They are also up to Nest Hub Max which has a display from 7-inch to 10-inch. This Nest Hub Max will go with the Nest app and will enable it to function like any other Nest cam. The hardware switch on the back of it will disable the camera and the microphone, both and it will cost you around $229 and can be shipped this summer.

A new “Face Match” has been introduced to recognize your face to customize its responses. This facial recognition feature is processed with on-device machine learning.Thus ensuring the data will stay in the device itself.

The search results for a few specific topics will include the 3D models from now onwards. A small tap on the model will help you to view the object in the real world with the help of augmented reality.

Google Lens can be found upgraded. It can now tell you the most popular items of an restaurant just when you point it towards the restaurant. Also, it can now do the calculations for you just by pointing it at your receipt.
Duplex on the web

Last year, Google had launched Duplex in the I/O event itself. It is an AI-powered customer service tool meant to help small businesses. It answers common questions and schedules reservations or appointments. This year, Duplex is expanding to the web. As an example, if you tell it to get a rental car for you, it can automatically start checking out websites and even fill the data and book a car for you according to the previous rental choices that you had made.

Google’s voice recognition models have shrunk from 100 to half a gigabyte. They can now be fitted on a phone. Since they are now stored locally, the latency involved with the back-and-forth pings to the cloud is eliminated. The conversations with the assistant can be made instantly. And another advantage of having it on the device is that it can run even on the airplane mode. The assistants are sure to hit the Pixel phones later this year. 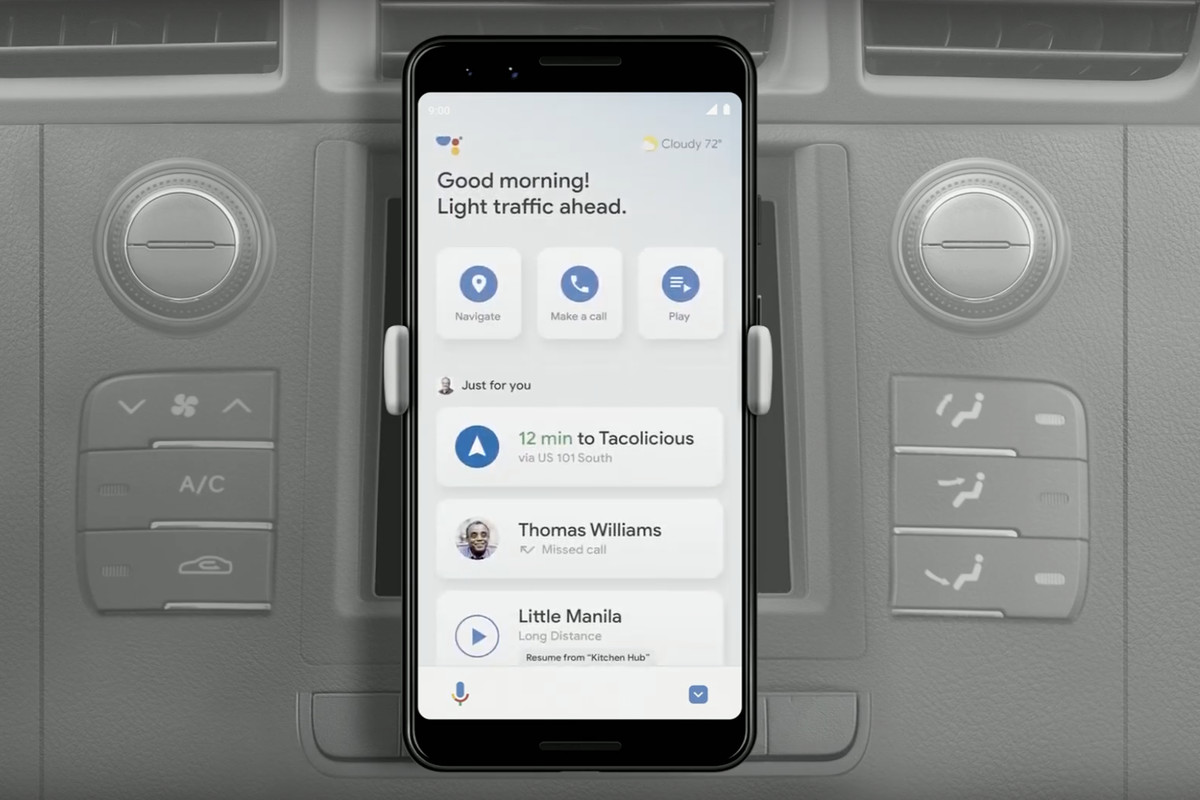 The Google Assistant will be built into Waze allowing people to report accidents or potholes by just using voice commands in a matter of weeks.

The let’s drive command when provided to the Google assistant will shift it to the driving mode. With minimal efforts, the dashboard view will be provided that focuses on anything that you might need while driving like the daily spots and music.

Like Incognito mode in a browser, the Google Maps will also have an incognito mode that will prevent your destination searches and routes from being saved in the history.

Beyond imagination, Android will be able to generate the captions for media right on your smartphones. It will be also able to generate captions for podcasts which you have saved and videos that you have recorded. A newly introduced feature called “Live Relay” will be used to perform these tasks. And it will also be able to transcribe the phone calls in real time so that you can reply via text messages.

Google is researching in order to adapt its AI voice algorithms to understand users with speech impairments. They are also customising the models to an individual’s speech which can help them to communicate better.

Android Q will come with a dark mode which can be triggered manually. It will turn on automatically when the phone is in battery saver mode.

This mode can help you in not getting distracted. You just need to make a list of apps that you find most distracting while at work and they will disappear just by flipping a switch until you turn the Focus Mode off.

The augmented reality mode that Google was working on for Google Maps is now the reality. When you hold us your phone you will be able to see a camera view of the world and once Google Maps compares this image to the street view, it will show you the direction to go ahead after determining your exact position. This is much better than GPS alone. The mode was in beta testing but will be launched with the Pixel phones.

After completing the consumer-focused keynote, Google had a keynote for the developers too:

We hope the information will be helpful for all Android users and developers. We will keep you updated with similar information every time.

GoodFirms, a Washington DC based company that provides with the reviews and ratings for top IT companies, ranked Coruscate Solutions among the top ecommerce development companies in Canada in 2018.…

Why Laravel is the Best PHP Framework?

5 Tips: How To Develop An iOS App Like Bodygram For Successful Execution?

Karl Lagerfeld once said “Fashion is a language that creates itself in clothes to interpret reality” Who doesn’t like well-fighting and nicely sewn clothes from fabric that’s soft and nice?…

Planning to develop a B2B application for your business? There are quite a few things that you would need to consider, and that too differently, before proceeding with the app…

App creators who gave the world solutions such as Facebook, Snapchat and Instagram, they are seeing withdrawal symptoms among the app users, specifically in the teen groups. You don’t see…